Home » Uncategorized » YOUR FARTHEST AWAY FAN 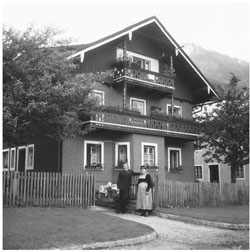 I am a ten-year-old baseball fan who roots for you. My name is Markas Edelstein but everyone in our village calls me Markie. We live in Mannersdorf, next to the Leitha Mountains in Austria, which are really like hills. It is close to the city of Linz and Danube River, but it is also closer to Germany than Vienna.

You probably think it is strange for a boy so far away to be knowing about the Detroit Tigers. That is okay. I know it is strange too. But ever since my Uncle Zeb went to America four years ago to visit his cousin in Michigan and came back with a box of Tigers souvenirs, I don’t think about other things much when the summer comes.

I know English somewhat good because Uncle Zeb does, and he taught me a lot of it. So please excuse me if I say things wrong when I do. Zeb is a great friend as much as an uncle. Some time I hope to come to America with him and see you play in a game. It is too bad  your Tigers team had two rough second place finishings after winning the World Series in 1935, but I think 1938 will be different and you will give those Yankees trouble.

I also wanted to tell you how much you mean to us Jewish over here. People in Mannersdorf don’t seem to think of us as athletic-skilled, or as much of anything lately. No one in the village but me and Uncle Zeb follow baseball, and if others want to they probably can’t because we aren’t allowed to have much relax time anymore.  Zeb also brought me back a ball and bat, but when I took them to a park with my sister to copy your big batting stance, the local officers made us take the ball and bat back in the house.

I know you are busy with your Tiger friends this week getting ready for the 1938 season, but I would love it for you to write me a letter some time. Maybe you can even send me a Tiger ball cap.

2 thoughts on “YOUR FARTHEST AWAY FAN”